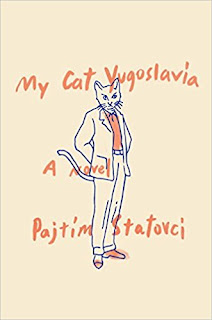 I honestly don’t know how to review this book. There are two story lines. One is told by Emine, a young Muslim girl in Yugoslavia. The other line is told by her son, Bekim. Emine’s story is horrifying, but it’s realistic. When a young man notices her on the road, he requests her hand in marriage- basically, his family buys her with new clothing for her family, food, jewelry, and enough money to finish building their house. In installments, we follow her wedding and life with him through the years, including the move to Finland. While her life was horrible, I enjoyed reading her narrative and learning about life in her country and as a refugee in Finland.

The other narrative, her son’s, didn’t make a lot of sense to me. On one hand, we have a realistic tale of a very lonely young gay man, living alone with a boa constrictor, which roams the apartment freely, despite Bekim being afraid of snakes. We see how he interacts with other men, the problems with his father, and how he returns to Yugoslavia after a number of years. But along with this, we see him in a club, meeting a cat who talks, wears human clothing, smokes, and seems at one  point to be tall enough to sit at a table like a human and then next minute he’s small enough to pick up. He’s also a total jerk (I know, many people would say all cats are jerks, whether they can talk or not) who is a total slob as well as emotionally abusive. My brain couldn’t manage to connect these events with the rest of Bekim’s life. I love magical realism, but I can usually make connections to the rest of the story with them. I don’t know if it was because this work was translated, or if I’m just not getting it.

In the end, it was a hard story to read because the protagonist’s lives were not easy- especially Emine’s. But there is hope even in such conditions, and I am glad I read this.

Neither of these things influenced my review.
Posted by Laurie Brown at 5:04 PM