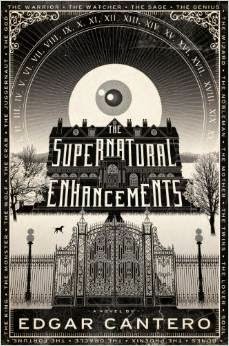 This book plays rather loosely with the definition of ‘novel’; composed of letters, journal entries, recording transcripts and receipts, it’s rather like ‘House of Leaves’, or, to go even further back and leave the horror genre, ‘Up the Down Staircase’. One might think that this would hamper engaging with the characters, and while it does that to a degree, by the end I found myself attached to the two main characters. A., a twenty-three year old European (English?) man has inherited- out of the blue from a relative he’d never heard of- Axton House, a manor, and its contents, in Virginia. He has come to take possession of this windfall; along with him is Niamh, a teenage girl with piercings, purple hair that is half shaved off, and who is mute. The relationship between them is not explained until the end, but they are not lovers.
The distant cousin, Ambrose Wells, has committed suicide on his 50th birthday, which happened to be the 30th anniversary of his father’s suicide. Both threw themselves out of a window, leaving a mess for the butler (now missing) to find. Wells’ lawyer, Glew (and what stick-to-itiveness he turns out to have!) Is there a curse? Are there ghosts? And what about this secret society that there are rumors of?

There are a lot of things going on, both human and paranormal. A. and Niamh seem to no sooner figure out one thing when another one comes up. There are a number of red herrings, and we don’t know until the end which ones those are. The climax was not at all what I expected. I enjoyed this book a LOT- I read it in late spring, but it would be even better read in winter, with a fire going and snow deadening sounds. I hope that Cantero writes more horror, and soon! Also, I love the cover art. I don’t know who did it, but it would make a great poster.

The above is an affiliate link. If you click through and buy something, Amazon will give me a few cents. Also, this book was given to me by the Amazon Vine program in return for an unbiased review. Neither of these things influenced my review.