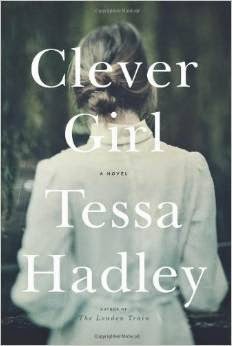 The clever girl of the title is Stella, born in 1956 and raised by her single mother. Her upbringing makes her fiercely independent, so when her mother remarries Stella is not thrilled; within hours of moving into a brand new tract house with him, she already knows she does not like living with him. Her luck with lovers is bad; one disappears the day after he makes her pregnant; another dies while she is pregnant with her second child. It seems that in all her relationships, no child is raised by its biological father.

Told from Stella’s point of view as a 50 year old woman, she writes with awareness of her mistakes and misconceptions in the past. The chapters each tell of a different time in her life and we watch her as she figures out life. She is a clever girl; extremely bright and a lover of books- at least most of the time. Despite her high marks, when she becomes pregnant the first time she leaves school and home to do things her own way. After her frustration as a child of being under the power of her father and mother, she makes sure that she is never dependant on anyone again. She always pays her way. She also chooses her own family- friendship and closeness trumps blood in her book.

A number of reviewers have stated that they did not like Stella; I didn’t dislike her at all but she felt rather remote to me. Even during her times of great loss I didn’t feel her pain; she is a character so independent that she doesn’t even need for the reader to care for her. But I liked the book. I couldn’t love the book because of the strange disconnect from Stella (the other characters are even more distant), but I thought it was very well done.

The above is an affiliate link. If you click through and buy something, Amazon will give me a few cents. This in no way affected my review.
Posted by Laurie Brown at 9:45 PM