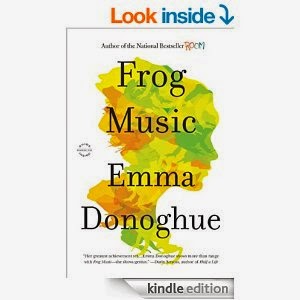 ‘Frog Music’ takes place in two times: a month in one time line and a handful of days in the other. Donoghue alternates between the past month and the present few days as Blanche Beunon, exotic dancer in San Francisco in 1876, tries to survive and get justice for her best friend of a month, Jenny Bonnet. A cross dressing young woman who carried a gun and rode a stolen high wheel bike, Jenny seems a less likely target for murder than Blanche herself. Blanche frantically scrambles to stay safe from her former pimp and his sidekick, fighting to get her child back (whom she cared not a bit for until reminded of him by Jenny), and get the truth about why Jenny was killed.

Formerly, Blanche lived in relative comfort, supplementing her income as a dancer/stripper with semi-high class prostitution; supporting her idle, sociopathic but beloved Arthur and his friend Ernest in style; and even buying the building they live in. At that point, the only mistake she figured she’d made was having a baby, P’tit, who, lest he interfere with Blanche’s ability to work, is put out by Arthur to a ‘baby farm’, horrific places where most of the infants died. Once Blanche finds out the circumstances of P’tit’s care, he suddenly becomes the most important thing in the world to her. At this point, Jenny has-literally- run into Blanche, and, despite this unpromising meeting, they become friends. But Jenny speaks her mind, which makes her a dangerous friend for Blanche.

Set against a heat wave that won’t let up, race hatred against the Chinese, and a smallpox epidemic, the pace never lets up. Blanche goes through a lot of changes and faces hard things. The killer turned out to be a total surprise to me, as did the reason Jenny was killed and not Blanche. This is one of the tensest books I’ve ever read, yet it is filled with the little details of what life was like in that time and place. I was surprised to find that the author based the book on a real event; don’t read the afterword before you read the story or it will be ruined for you! Not as good as Donoghue’s ‘Slammerkin’ but then, not many books are as good as ‘Slammerkin’.

The above is an affiliate link; if you click through and buy something, Amazon will give me a few cents. This in no way affected my review.