The Normans: From Raiders to Kings, by Lars Brownworth. Crux Publishing, 2014 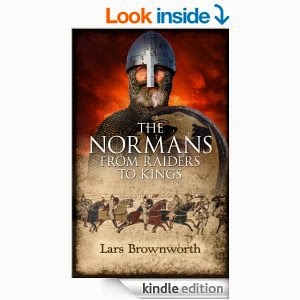 The Normans were a group that I knew nothing about beyond the fact that they are why part of France is called ‘Normandy’ and that William the Conqueror was one, so I was happy to get this book. It’s a very fast read; Brownworth doesn’t dwell on the details of battles (although the dates and statistics are there) but concentrates on the personalities- and the Normans provided some compelling personalities.

I’d always thought of the Normans as being French, but they were Vikings. At different times various Normans settled in and ruled parts of Great Britain, France, Italy and Sicily, and even parts of north
Africa. Most of the Normans who went out and conquered areas did so because there was a shortage of land in their birth families. Some of them founded monasteries, built churches and libraries, and even created organized and codified rule rather than basing government decisions on whims and who was the favorite at the time. Obviously, they weren’t all simply northern barbarians. They were greedy, ambitious and took a lot of chances that other rulers didn’t and in some cases it paid off. Paid off not just for them, but, in the end, for Europe. It was under their influence that western Europe started emerging from the dark ages.

The book was a very fast, engaging read. There are maps and a who’s who in the front of the book so that one doesn’t get lost- although with the habit rulers have to naming their heirs after themselves, I still found myself confused at times. Covering over 200 years and most of Europe, it’s interesting to see how and why areas changed hands so frequently. The book isn’t of great depth, but it gives all the highlights.

The above is an affiliate link; if you click through and buy something, Amazon will give me a few cents. This book was given to me by the Library Thing Early Reviewers program in return for a fair review; neither of these things affected my review.
Posted by Laurie Brown at 4:00 PM