What Should Be Wild, by Julia Fine. HarperCollins, 2018 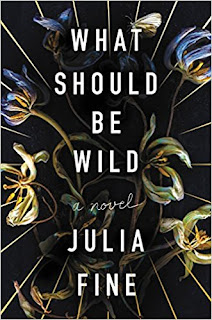 Little Maisie Cothay was born from her mother’s dead body. Right away (thankfully) her father discovered that the touch of her bare skin would kill- or resurrect. It could even happen repeatedly- she killed her father several times before reaching toddlerhood. She could even resurrect the long dead, which necessitated coating all the bare wood floors and trims in the house she grew up in with several coats of varnish, and making sure she only wore synthetic fiber clothing. She grew up in her mother’s decrepit Blakely family mansion in a large forest, with only her anthropologist father (who seems to see her as a long running experiment) and the housekeeper for company. Her father educated her and she read everything in the large library- being careful to wear gloves, of course. But one day the housekeeper dies, she accidently runs into the housekeeper’s nephew, and her father disappears. This is when she decides she must go on a quest to find her father.


She’s not the first girl of her mother’s family to go into the forest, which was forbidden to her. Through the years, many have gone in and not returned.  Maisie also finds herself going into the city and meeting new people for the first time. It’s a very abrupt and sudden coming of age as she explores both areas, and finds that evil can wear an attractive face.


The story is a fantasy, coming of age, fairy tale. Unlike in most fairy tales, the girl is the hero, not the princess in distress. There is a sleeping beauty, but she isn’t waiting for a prince to kiss her. It’s well written, and I liked the back stories of the Blakely women in the woods. I enjoyed the book, but I can only give it four stars; there were some problems with pacing, and something lacking in the Blakely women in the woods.