My Father’s Wake: How the Irish Teach Us How to Live, Love, and Die, by Kevin Toolis. Da Capo Press, 2017 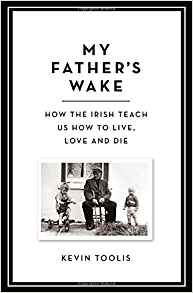 Kevin Toolis has experienced a lot of deaths. As a child, he caught TB and was put in an adult ward of men with various lung diseases- cancer, TB, black lung, a veritable buffet of death. He grew up in rural Ireland, where traditional death customs linger on. His brother died as a very young man- after receiving a bone marrow transplant from the author. As a journalist, he witnessed death in war zones. He has been virtually steeped in death. But it wasn’t until he went home for his father’s death that it all came together for him.


As his father lay dying, the whole extended family, friends, and neighbors started showing up, to stay through his death, wake, and funeral. They spoke with Sonny before he died, they washed and dressed his body after, and they kissed him in his coffin. Endless tea and sandwiches were consumed. Everyone, from old folks to young children, participated. Death, in this village, was an everyday occurrence, not something to be hidden away. Deaths occurred at home, not in a hospital. The body was not whisked away to a mortuary. This, he says, is the way it should be. We all die; why should it be hidden away? Why can’t we once again normalize it, like weddings and birthdays and all those other landmarks of life?


Alternating the course of his father’s death, wake, and funeral with essays on death in other circumstances, it’s not a feel good book. It’s a thoughtful look at a sad subject- there are sections that brought tears to my eyes. But it’s a book on a subject that our society needs to think about these days. Four stars.

Neither of these things influenced my review.
Posted by Laurie Brown at 3:03 PM

Email ThisBlogThis!Share to TwitterShare to FacebookShare to Pinterest
Labels: death and dying, sociology