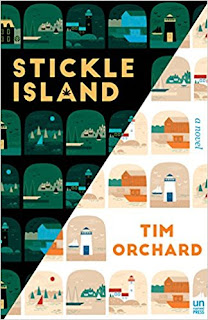 Stickle Island is a tiny bit of earth in the ocean, a mile off the south east shore of England. The population is small; most people have long since moved away in search of jobs. A few back-to-the-landers have moved there. The entire population can fit into one meeting hall at the same time. The story takes place during Thatcher’s term of rule; the twice daily ferry that is their life line to the mainland is something that will be cut. How will they survive on the island without this service?


Their salvation arrives after a terrible storm; six bales of high grade marijuana have washed up on shore. Realizing the value of these, and that there is apt to be someone who expected their arrival out looking for them, they are promptly hidden by a small group of enterprising teens, who call a general meeting of the entire populace. Together they will stand against the dealers when they arrive. And arrive they do, with fancy cars and armed muscle.


This is a satire, and it reminds me of lots of British sit-coms. If you’re into British comedy, you can pretty much picture the cast and setting. It’s not deep, and the characters are not well developed, but it’s great fun. Four stars for this first novel.

I received this book from the Amazon Vine program free, in return for an unbiased review.