The Neuroscientist Who Lost Her Mind: My Tale of Madness and Recovery, by Barbara K. Lipska with Elaine McArdle. Houghton Mifflin Harcourt 2018 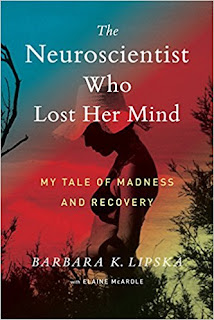 One day, Barbara Lipska, two time cancer survivor, doctor, and a researcher trying to discover physical markers of schizophrenia in the brain, puts a nice gloppy mass of henna on her hair, wraps it in plastic, and goes for a run. A very long run- we becomes disoriented and lost for quite a while. She returns with red dye running down her head and body, looking like a victim of a serious crime. Then she suddenly loses a quarter of her visual field. Despite being aware that this means something bad has happened in her brain, she thinks little of it. It’s only with urging from her family that she goes to the doctor. All she is worried about is getting ready for a conference where she’ll be presenting, and also getting some skiing time in. This is just the start of another battle with cancer, a return of her melanoma, this time in her brain.


As the cancer spreads and proliferates, her cognitive problems become worse. Radiation brings no permanent solution to her cancer. As the author runs out of treatment options, she enrolls in a clinical trial of immunotherapy. Her cognitive difficulties get worse over the course of the four dose regimen, but she keeps the worst of it to herself. She feels that a lot of her problem is inflammation in her brain due to the immunotherapy, not the cancer itself. She manages to hide her problems enough to get the fourth and final dose, something she knows she wouldn’t be allowed to have if they know how much inflammation she has. If she has too much inflammation, the brain swelling will kill her. If she doesn’t get the final dose, the melanoma will do the job… fortunately, she wins her gamble.


As the inflammation goes down and the tumors shrink away, she begins to remember all the strange things she went to while her brain was swollen and being pushed on by tumors. She realizes she has lived through a situation very like schizophrenia, proving that mental illness can be created by physical stresses on the brain.


It’s interesting to read; Dr. Lipska relates the various cognitive issues she had to the parts of the brain that were inflamed or squeezed by tumors. The prose is a little choppy but readable. You don’t often read accounts of people who “lost their minds” and then were able to get them back. Four stars.

I received a free copy if this book from Net Galley in return for an honest review.