Tomorrow Will Be Different: Love, Loss, and the Fight for Trans Equality, by Sarah McBride. Crown Archetype, 2018 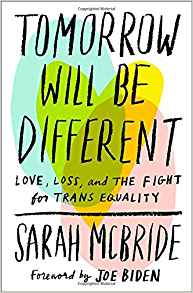 Sarah McBride is the woman who was the first trans person to speak at a national political convention in 2016. She was only 26 at the time, but had lived a life packed with more events than many people get in a long life time.


Obsessed with politics since she was a child, she was student body president in college as well as being head of the student newspaper. She had worked on campaigns for local politicians already at this time. When she came out, she was lucky; her family was supportive (although shocked, and grieved the loss of their son for a while before realizing she was still the same person), the student body was supportive, and the politicians she knew were supportive. While it was by no means easy, she managed to avoid a lot of the problems some other trans people suffer- violence, loss of friends or family. And she is very aware of how lucky she is!


As soon as she was out of college, she began working in politics. There she met Andy Cray, a trans man who also worked in politics. They fell in love, and planned to make a life together. Then he was diagnosed with a fast moving cancer. After enduring grueling treatments, he died just four days after they were married.


McBride’s story is both inspiring and heart breaking. While this is her personal story, there is much of politics and trans issues in here, as well as basic LGBTQ rights. It’s a very informative book as to what LGBTQ people have to go through, how much they have gained legally and how far there is to go to achieve full equality. The book is well written- the author does a lot of writing professionally- and easy to read- the legal and political parts blend seamlessly with her personal life and do not bog the story down. I hope she has a long and happy life from here on out- one thing I’m sure of is that it will be a busy life!