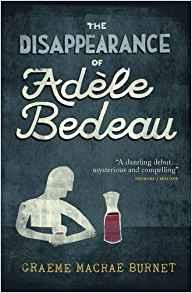 Obviously this is a work of fiction, but it goes further than you’d think at first glance. The translator’s afterword states that Brunet (how close to Burnet that is!) wrote the book in 1982 and it became a cult hit and later, a film. Brunet’s life is given in short form. But this is illusion; there was never any Brunet. He is as fictitious as Adele Bedeau and the others in the story.

Adele is on the stage very little in this short novel. The two main characters are Manfred Baumann, a banker, and Inspector Gorski, of the local PD. Baumann is a regular customer at the café where Adele works. When she disappears, Gorski at first does not suspect Baumann. But Baumann, an introvert with no social aptitude, no love life, no hobbies, and no friends, lies about having seen her the night she was last seen. It’s a harmless lie; he has nothing to do with her vanishing. But once he’s lied, he finds himself getting deeper and deeper into a web of falsehood, until his nerves give way. Inspector Gorski, meanwhile, discovers information about a case that’s haunted him for 20 years. The ending has a couple of twists.

It’s a bleak story, set in a small town that’s not doing well. No one is happy. It’s an interesting story, but one that gave me a bad feeling. It’s not a fun read, but it is a well done one. What’s weird is that I had the feeling that I’d read some version of this before- many years before. No idea where that idea came from! Four stars out of five.