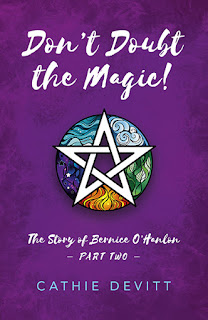 Bernice O’Hanlon has returned to the island she grew up on. She is looking for answers- and two of the people who could provide those answers are now dead: her grandparents. The farm she feels should be hers by inheritance is lived on by a pair of brothers, who have been working the farm for her grandparents for years- and they have moved into the house. Bernice is a witch, and in this story she works with the Tarot to figure out how to proceed. The action alternates between the island and Glasgow.

This is the middle novelette of a trilogy, and while it’s said to be readable as a standalone, I had trouble figuring out who all the characters were and how their relationships worked- and there are a lot of characters. The action switches between them rapidly. I felt like I was watching a sped-up film; unable to catch up with what was going on. I enjoyed the premise that there were a group of witches on the island, and that the skills had been passed on to Bernice. I could understand her need to find out what happened to her parents and to her infant son. But with so much going on, I couldn’t form a connection to her or any other character. There was not enough time spent with anyone to care about them. I can only give it three out of five stars.

This in no way influenced my review.
Posted by Laurie Brown at 9:09 AM