The Other Side of the Wall, by Andrea Mara. Crimson, 2017 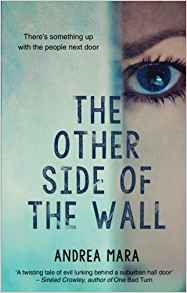 Sylvia has two young children and has just returned to work from maternity leave, only to find a large sum of money missing from one of the accounts she manages. Short on sleep and tired to the bone trying to deal with it all, one night she looks out only to see what seems to be the body of a small child in the neighbor’s pond. But after she gets downstairs and tries unsuccessfully to rouse the neighbor, she finds nothing in the pond. Then she hears the sounds of a man crying through the walls, and things start changing in her house at night. Is she sleep walking, hallucinating, is it real, or is she being gas lighted?

Sam has just moved in next door. His wife and kids are staying in their former home while he does improvements on the new house after work, while he visits them on the weekends. Sam has done well, but not hugely well, as a money manager.

Kate is Sam’s wife; she is a bored housewife with young children. She is tired of having to be a full time mother, especially with Sam not around during the week. She wants to have some adult conversation and fun. Her brother, Miller, doesn’t have boundaries, and shows up at random times despite being told not to.

The story alternates between these people. At first I got a bit confused when the POV shifted and then figured out that the shift took us back in time to when the first POV had started. There is a huge amount of tension in this psychological thriller, although it comes in swells and troughs- not all the narrative threads are as intense as the others.

I found it compelling reading, although I can only give it four stars out of five. It just doesn’t have the smoothness that a more practiced writer could have (this is Mara’s first novel). I admit I was disappointed that it was not supernatural horror, but that was my fault for not reading blurbs finely enough, and not something I’m taking a star off for!

The above is an affiliate link. If you click through and buy something- anything- from Amazon, the will give me a few cents.

I received this e-book free from the Library Thing Early Reviewers program in return for an unbiased review.

Neither of these things influenced my review.
Posted by Laurie Brown at 4:05 PM