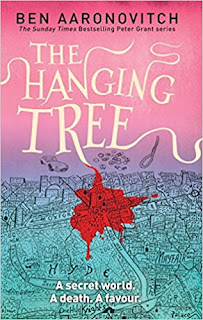 In this most recent of the Rivers of London series, Constable Peter Grant is back in London, but still in a territory he’s unfamiliar with. This time it’s the realm of the very rich.

A rich girl ends up dead of an overdose at a party- in a place where they shouldn’t have been partying. Lady Tyburn calls Peter with a request (that’s putting it gently): her daughter was at the scene of the crime, and she wants her name kept out of it. Not just proven innocent of the drug thing, but completely not there.

Of course it turns out that there is a supernatural element to the situation, so Peter is on the case legitimately. The long story arc that started six books ago is advanced here: the Faceless Man is involved. And that means Lesley makes an appearance. Peter spends time having a fire fight in Harrods, having a super expensive flat blow up, building new tech things to use around magic, and narrating the story as the world’s best educated and most snarky POV ever.

Of course it’s a five star book. I hope this series goes on forever. It’s funny, it’s supernatural, and it’s the most diverse urban fantasy I’ve read. For that matter, it’s probably the most diverse stuff I’ve read, period.

This in no way influenced my review.
Posted by Laurie Brown at 4:30 PM