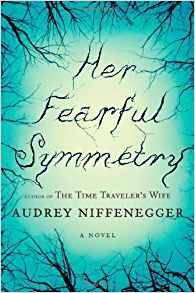 Julia and Valentina are identical twins. They are the daughters of Edie, who was the twin sister of Elspeth, who has just died and left J & V her flat in London, along with a great deal of money. The catch is, they must spend a year living in the flat, and their parents must not be allowed into the flat. This sounds all right to J & V, who although technically adults, show no signs of maturity. They have dropped out of three colleges and do nothing more than exist. Actually, that’s not quite true; Valentina is interested in fashion design and enjoys sewing and upcycling used clothing. Julia, the bolder of the two, has no interest in anything, and as she’s the dominant one, nothing is largely what they do.

The building they come to live in has other tenants; on the top floor lives Martin, a victim of severe OCD and agoraphobia, whose wife has just left him, unable to deal with his rituals and towers of trash any longer. On the ground floor lives Robert, who was Elspeth’s lover. The building backs up to Highgate Cemetery, with the graves of many famous people as well as the crypt that contains Elspeth herself, and her family. This will be important later. The flat is also inhabited by Elspeth’s ghost- something she makes known after a while.

This is one creepy book- and some of the creepiness isn’t supernatural. The way Julia dominates Valentina, the reason for the rift between Edie and Elspeth, the relationship between Valentina and Robert and between Valentina and Elspeth- there is wrongness everywhere. And that created a problem for me: I couldn’t manage to really like any of the characters. Even ones who I felt sorry for at first turned out monstrous. As another reviewer said, Martin is the most human and likable person in the book- and his relationship with Julia is actually a good one.

It wasn’t hard to figure out what would happen after a certain point, but reading how it played out was still a creep fest. The author’s prose is lovely; even when I was disgusted with the people, the writing beckoned me on. Because of my dislike for the characters I can’t give it five stars, but it’s a very strong four, because very little horror really gives me the shivers.

The above is an affiliate link. If you click through and buy something- anything- from Amazon, they will give me a few cents. This in now way influenced my review.