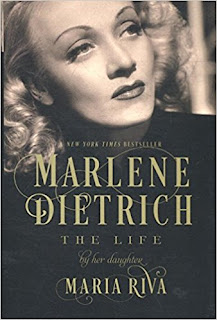 This is an absorbing biography of Dietrich by her daughter, Maria Riva. We are given the star’s life in detail, from her birth until her death. Riva’s life was closely twined with her mother’s from the day she was born- her mother used her as constant companion (who needs school when you can be your mother’s dresser?) and servant- so she was there to see and hear what Dietrich did and said for decades. From an early age, Riva was aware of her mother’s constant sexual escapades- sex and performances are the main themes of the book, along with Riva’s attempts to escape her mother’s life and have a life of her own. Dietrich had no concept of boundaries, and said and did the most atrocious things in front of her daughter, and then her son-in-law (when Dietrich returned from having sex with John Kennedy, she pulled her used panties out of her purse and thrust them to her son-in-law’s nose, encouraging him to smell the scent of the president!) and then even her grandchildren. She lied about her age, which meant she had to lie about her daughter’s age, too. When Riva was in her teens, she was still being dressed as a little girl, to enforce the illusion that Dietrich had only given birth to her a few years before. Dietrich drank heavily (especially late in life) and was her own pharmacist, in the years when amphetamines and downers were easily gotten. As far as I could tell, she never gave a thought to anyone else unless they could do something for her.

But she was beautiful, and could enthrall audiences. She was smart- she learned from wardrobe, lighting people, directors and anyone else and applied what she learned to her art. Josef von Sternberg, the man who made her a star in ‘Blue Angel’ and with whom she had an on again, off again affair for years, taught her the most- mainly, how to light herself for the effects she wanted. Thankfully, most of the people she worked with were willing to take her orders. She was a hard worker; she spent money like it was water- supporting herself, her daughter, her husband with whom she did not live (most of the time), her husband’s mistress, and giving extravagant gifts to her lovers- so she had to work almost all the time. She was strict with herself when working, and had bulimia, which allowed her to eat the rich foods she loved and still lose weight. Sadly, in her old age, she developed some dementia and that, along with her alcoholism and drug use, made her last years sad indeed.

Of course this is the biography of Riva, too. As long as her mother was alive, their lives were entwined. Riva did carve out her own life, though, becoming a television star for many years and raising a family. I was entranced by this biography- I couldn’t stop reading because every time I figured Dietrich couldn’t do anything worse, of course she would!

I received this e-book free from Net Galley in return for an unbiased review.