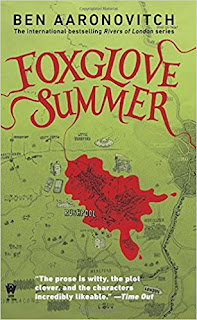 This is the fifth book in the Rivers of London series starring Peter Grant, London police constable and wizard in training. This time, he’s sent to the countryside to see if a case has any magical component to it. Two young girls have vanished, and the local PD hasn’t turned anything up yet. At first it doesn’t seem like there is any magic involved, but as Peter investigates he turns up things that the local PD have missed, and he starts getting suspicious. Soon he discovers that there is a lot about the magical world that his mentor has not told him about, including invisible carnivorous unicorns. He gets the girls back, but that’s far from the end of the story.

Peter grows a lot in this story. He takes charge of the investigation, something he’s not done in London. He mixes technology with magic. He uses magic on the fly. And he hasn’t lost his deadpan delivery of snark.

I love this series; the author has given our hero a wonderful voice with a great way of describing things that make me giggle a lot. Taking him out of London was refreshing, as was his relationship with Beverly Brook. Even though the larger story arc that’s been building over the first four books is not advanced, I didn’t miss it at all. Long may this series live! Five stars out of five.

This in no way influenced my review.
Posted by Laurie Brown at 4:38 PM