The Garden of Small Beginnings, by Abbi Waxman. Berkley, 2017 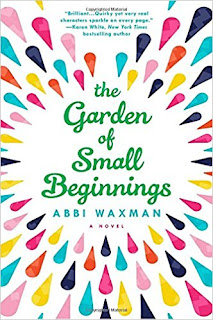 I’m not usually a fan of Chick Lit; I requested this book because of the hook of it centering on a gardening class and the people in it. The narrator, Lilian Girvan, is a young widow with two daughters. Her husband died, right in front of their house, almost four years ago. She had a breakdown and was hospitalized for a couple of months when that happened; she is still grieving, although coming out of it. Her life centers on work (she’s an illustrator for a textbook publisher), her daughters, and her sister, Rachel. There’s not anything she does just for herself.

When her employer gets a contract for a book about vegetable gardening, they have an unusual request from the authors of the book: that the illustrator take the gardening class one of their number will be putting on at the L.A. Botanical Gardens. This brings her in contact with the rest of the cast of characters: the instructor, and the other students. The class meets on Saturday mornings for six weeks. Over this span of time relationships form and change. These people meet not just at the vegetable garden, but in each other’s yards, too. Lil’s daughters and Rachel are also involved.


It’s interesting, but the characters are a little too perfect to really feel involved with. In fact, it wouldn’t have really held my interest except for one thing: the narrator is hilarious. So is much of the dialog. It’s snarky but not mean. The author is very good at describing the little details of everyday life in a way that I found myself going “Oh, yes, I know that well!” A light, funny, mostly upbeat read.

Neither of these things influenced my opinion.