Inheritance From Mother, by Minae Mizumura. 2012; Other Press English translation 2016 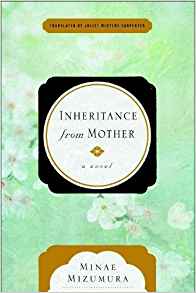 The Katsura sisters have long had an embattled relationship with their mother. Noriko Katsura, is an egotistical and selfish woman with a taste for the finer things in life, and little, if any, feelings for people. The sisters dream of the day when their mother will finally die, and her demands on them will stop.

This sounds horrible, especially in a society where children are expected to love, revere, and care selflessly for their parents. But for Mitsuki, the daughter on whom the majority of the burden falls on, it’s a chance to finally live her own life. As a child, she was neglected in favor of Natsuki, her more beautiful and talented sister. As an adult, her life is pretty much run by her husband, a fellow college instructor who wants a luxury condo- and is having (another) affair with a younger woman. What would Mitsuki do if she could make decisions without having to consider either of these people?

The first half of the book revolves around Noriko’s final hospitalization and death, and fills us in on the history of the Katsura family. The second half is what Mitsuki does after her mother’s death as she figures out what she really wants out of life. It’s fascinating reading the history of her family and how it was shaped by Japanese culture, as that culture itself changes through modernization and influences from the West. While told in third person, Mitsuki is the main focus of the tale. Mother/daughter relationships, marriage, aging, and sister relationships are all treated here with sensitivity and depth.