The Changeling, by Victor Lavalle. Spiegel and Grau, 2017 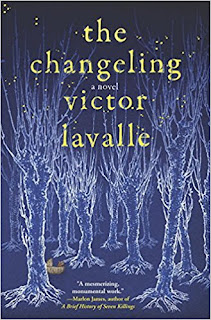 “The Changeling” starts out slowly. Apollo Kagwa is the son of a hard working nurse and a father who abandoned them when Apollo was four. When Apollo meets Emma Valentine at the library, and they get married and she gets pregnant, he vows he will be a father who gets it right. He’ll be there for his child, an attentive and loving father. He changes, bathes, and feeds his son Brian. He takes him to the park and takes tons of pictures of Brian, and uploads every one of them to Facebook. It never occurs to him that this could attract the wrong kind of attention.

Since he was young, Apollo has been making money by buying and selling old books. He does okay; he and his wife have been able to buy an apartment. But while it pays the bills, he’s never had a big find, the kind of find that would give them a cushion. This changes when he finds a first edition of “To Kill a Mockingbird”- inscribed by the author to Truman Capote. This could be the break he’s been looking for. He involves his best friend, Patrice, a fellow book man, who is war veteran and cyber genius.

But disaster is around the corner. Emma seems to have contracted postpartum depression, claiming that Brian is not their son anymore, that he’s been taken. She performs a horrific act that lands Apollo in the hospital, and vanishes. Thus begins a quest of revenge.

This story combines cyber stalking and Old World fairy tales; it’s horror, urban fantasy, and ‘regular’ fantasy all put together. It portrays the dangers of internet oversharing, trolls, and being a person of color on the streets at night. But the heart of the story is how love will make a parent go to any lengths to save their child. The story might have started slowly, but it built up steam fairly quickly and sucked me totally in. It’s an edge of the chair read, impossible to stop reading. You cannot predict what will happen next – there are so many strands of story- and I enjoyed the characters.

Neither of these things influenced my review.
Posted by Laurie Brown at 1:03 PM