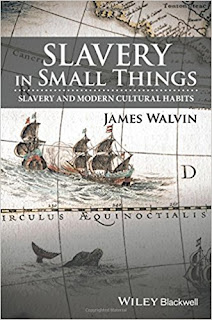 “Slavery in Small Things” examines how slavery changed the world in ways that most of us don’t think about- or even know about because it’s ignored in textbooks. It was through slavery that cane sugar, tobacco, and cotton plantations came about. That changed people’s dietary habits, created smoking habits all over the world, and changed how people dressed. Slavery allowed huge mahogany forests to be cut down and made into very popular furniture- furniture that started out only in the homes of the very wealthy, and now can be found in the homes of all economic strata. Cities in England changed, with factories springing up to make that cheap cotton into fabric and to forge the chains that held the slaves. Armed ports developed on the coast of Africa, where slaves from the interior were held for the disgusting slave ships to come get them. The western world economy changed because of this exploitation and torture of people.

This is a short, fast read, in easy to understand language. Things did get repeated at times, almost like the chapters were first written as separate articles, but I don’t think this is the case. I feel this book should be in all high school curriculum.

Neither of these things influenced my review.
Posted by Laurie Brown at 12:00 PM