The Violet Hour: Great Writers at the End, by Katie Roiphe. The Dial Press, 2016 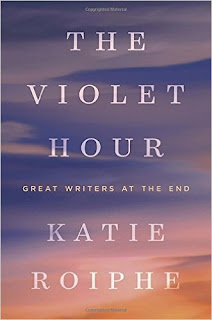 “The Violet Hour” examines five (six, actually, if you include the epilogue) writers and how they faced their impending deaths. The author not only examined biographies but source materials and when possible, interviewed friends and family members. Susan Sontag, Sigmund Freud, John Updike, Dylan Thomas, and Maurice Sendak have their last years/months/days/hours examined. John Salter, in the epilogue, she actually interviews a while before he quite unexpectedly and suddenly dies- they talk of death and how to face it but of course he had no idea he was soon to die.

Susan Sontag, who had survived two bouts with cancer that were supposed to kill her seemed to think she could beat the third one, too. She tried everything, including a bone marrow transplant which was experimental in those days. She worked until the end, writing in her hospital bed.

Freud also worked until the end; he also, despite having extensive oral cancers, continued to smoke his cigars. To keep his head clear, he eschewed painkillers except for aspirin; when the pain finally becomes unbearable, he asked for terminal sedation. No in-between measures for him.

While all their deaths are different in both cause and course, and they didn’t all accept their dying to the same degree, they all worked right up until the end- although admittedly Dylan did as much drinking and having sex with people not his wife as he did working. These people all had the benefit of knowing that their work would live on after they died; they knew that they had not lived meaningless lives (not that you have to be an artist to have a meaningful life; it’s just that I know one of the questions dying people ask themselves is whether their lives have had meaning and if anyone will remember them). Did that make it easier for them to face death? Perhaps. Or did working keep their minds off their impending demises? It seems most likely that they just had so much more to say that they had to race and try and beat the clock.

It’s a very interesting book; I’ve read a number of books about the end of life but never one that focused on writers. I wonder if visual artists have the same irrepressible urge to create to the end as writers do, or if musicians do- although David Bowie’s recent death would seem to point to that. I have to think that this makes death a little easier.

This in no way influenced my review.
Posted by Laurie Brown at 11:26 AM