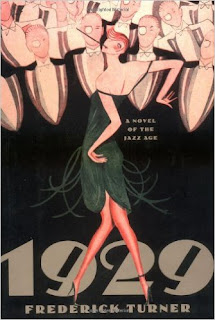 Jazz and the 1920s are subjects I love, so I was happy to come across this book. It had lots of wonderful reviews, too, so I jumped right into it. But it took quite a while for me to feel the story; it’s a fictionalized biography of jazz coronetist Bix Beiderbecke but in the beginning it focuses just as much on the gang activity in Chicago, largely as experienced by Henry Wise (not his original name), former mechanic and driver for Al Capone, and his sister Helen/Hellie/Lulu, who is the girlfriend of Machine Gun Jack McGurn (the Wise siblings are fictional). In fact, the book starts in modern days, at the annual celebration of Beiderbecke, the Bix Fest, with Wise reminiscing at Bix’s grave. As Wise remembers, Bix moves from peripheral character to main, then the narrative viewpoint leaves Wise behind completely and becomes all Bix- but never from Bix’s actual point of view. He always remains viewed from the outside; we never get to see more than he shares with other people. And he shared very, very little. The people around him can never figure him out, can never make a real connection with him. He’s a (mostly) gentle person, and quiet a lot of the time, but he has a totally flat affect. Despite my respect for his work, I had trouble caring about him as a character in this book. But it’s not just him; the other characters don’t fare much better. We get celebrities- Bing Crosby, Clara Bow, Maurice Ravel (I never knew he liked jazz), bandleader Paul Whiteman, Louis Armstrong and others- but only Clara comes to life at all.

Bix was a mainly self-taught player; he couldn’t read music very well but had an incredible ear. Along with horn, he played piano. Sadly, he was an alcoholic and during Prohibition what was sold wasn’t always safe to drink. He was known to drink some stuff (alcohol with a poisonous denaturant) that ended up killing thousands of people, and it was likely that which caused his short life as much as drinking regular booze. He was only 28 when he died, having been sent to ‘dry out’ a few times by his family but always going back to booze when he got out. He was sad example of ‘live fast, die young’ and the world lost a great talent when he died.

The prose is fast paced and jerky; it barely stops for a breath. It’s like the words are doing the Charleston. While I get that this was to make the reader feel like they were in that fast paced decade, it got tiring to read. There is no real plot; it’s a telling of “and then so and so did this; then that”. I can understand why; a person’s life rarely has a plot like fiction does. I have conflicting feelings about this book; I didn’t really enjoy reading it (and thought at times of not finishing it) but I don’t feel it was a waste of time. I’m not sure if it’s the book or if I’m missing something.

The above is an affiliate link. If you click through and buy something-anything- from Amazon, they will give me a few cents.

this in no way influenced my review.
Posted by Laurie Brown at 3:34 PM