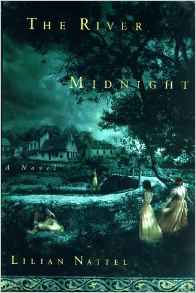 Set in a shtetl in Russian occupied Poland during the late 1800s, this is a story told multiple times. The action takes place over a year’s time (with both flashbacks and glimpses of the future, too); first it’s told from the viewpoint of the women of the village, then again from the men’s POV, then finally from the view of the main character, Misha, the shtetl midwife and herbalist. While the whole village is part of the story, the backbone of it follows the pregnancy of Misha, ended with her giving birth.

The story focuses on four women. As young girls, they were nicknamed the vilda hayas, the wild creatures, because they ran wild through the forest and the village. They had great plans. But in the end, one emigrated to America and died, leaving two children; one ran her husband’s business brilliantly but never had a child; one had too many children; and the fourth was Misha, who did not have a husband but was pregnant, had one divorce, still wore her hair loose, and knew all the secrets of the shtetl.

Each telling brings the story and the people more into focus, like watching an old interlaced GIF download years ago. While we find out what happened in the first telling, by the end of the third telling we know *why* the things happened. Hard things happen; children are orphaned, a young girl goes to jail, an unspeakable crime takes place. But it’s still a story of joy; their sect of Judaism asks them to look for joy, to help each other, to let no one starve.

Nattel brings the shtetl to life with her writing. From the houses with the chickens roosting in the hallways, to the herbs that Misha gathers and stores, to the way that religion permeates every aspect of the villager’s lives, it’s all described in loving prose. The love and friendship that binds them together is warm and alive; the story is like a tapestry with a million details. While the pace is moderate to slow, I love this book. It has a touch of magical realism and a lot of life.