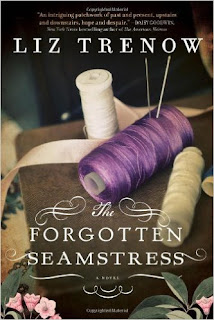 In 2008, Caroline is clearing out her mother’s attic when she finds a quilt, which her grandmother left to her. It’s an unusual piece of needlework; the seaming and embroidery are extraordinary, and some of the fabrics are very striking silks. So striking that when Caroline shows it to a friend who is a textile expert, she recognizes them as tiny pieces of fabrics known as the May Silks, specially woven for the wedding of Princess May (Mary) of Teck. How they ended up in a patchwork, and in Caroline’s grandmother’s possession, is unknown, but Caroline intends to find out.

Another story goes along as Caroline searches for who made the quilt. In 1970, a graduate student in psychology is interviewing an inmate of a mental hospital. The patient, Maria, tells the story of being an orphan who is taught to sew and is selected to work in palace for the royal family. She talks of the Crown Prince, of a baby that was taken away from her, and her belief that she is in the mental ward to keep her from telling the world of the Prince’s baby. All fantasy, of course, the hallucinations of a schizophrenic. There is no way a lower class girl attracted the attention of the Prince! But how are these two woman connected?

I enjoyed the puzzle of figuring out the origins of the quilt, the descriptions of life in the palace, and especially the descriptions of the fabrics and clothing. I was less impressed by the characters, however. Caroline and Maria are both people to whom things happen, but who rarely initiate action of any kind. In Maria’s case, a lot of that is out of her control, but her passivity with the Prince is kind of annoying. But she was a teenager in love, and so that’s a pretty common attitude. Caroline, however, is kind of annoying- she is older, supposedly independent, educated, and in control of her own fate, but she seems to float along. While I liked the two women, it was a lukewarm sort of liking. The other characters didn’t have much depth. It’s an enjoyable book but not a stunning one.

This in no way influenced my review.
Posted by Laurie Brown at 3:28 PM