Halfway Down the Stairs, by Gary A. Braunbeck. JournalStone, 2015 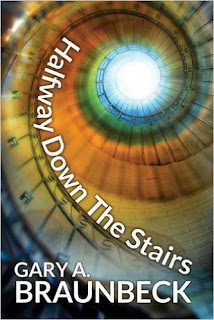 Gary Braunbeck has been writing since the late ‘90s, but somehow I’d never discovered him. I’m glad that I have now.

I have to admit that some of the stories were not to my taste. He mainly writes horror but the type is all over the map. Some of the stories in the collection were what I refer to as ‘human horror’- the terrible things that people do to one another, rather than supernatural terrors. Child abuse and sexual abuse feature in a couple of stories and I found them very difficult to read. I thought about putting the book aside, but I persisted and I’m happy I did. Not all the stories are about human brutality-although the ones that are, are amazingly, stomach turningly so. Some are like fairy tales. One, ‘Afterward, There Will Be a Hallway’, is a life-after-death story that is achingly beautiful. A tale of Charles Fort and Bram Stoker is darkly amusing. It’s all very dark; things and people rot and decay. It’s as much noir as horror. “We Now Pause for Station Identification” is a zombie apocalypse told in a unique manner. Some are horror overlaid on the human condition- love, sex, working one’s life away. It’s a pretty great collection, but you do have to have a strong stomach.