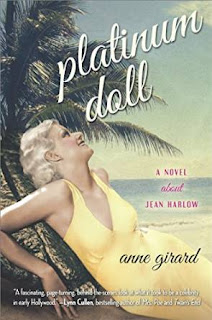 Harlean Carpenter-Jean Harlow’s real name- was the first blond bombshell of Hollywood. She arrived there 1928, seventeen years old, and newlywed. Despite having a mother who tried a few years earlier to break into film, Harlean had no intention of working- her young husband was a trust fund baby and could support them in style. But a friend was trying to break into movies, and needed a ride to a casting call. An agent saw Harlean waiting in her car and the rest was history.

This is the story of how Harlean became a glittering Hollywood star, but even more than that it is the story of her marriage to Chuck McGrew. Orphaned early, he grew up rich and came into even more when he turned 21. He loved Harlean to distraction, drank too much, and was jealous of anyone who took too much of Harlean’s attention or time. He didn’t care for her budding acting career and imagined affairs with men she worked with. His biggest problem, though, was with Harlean’s mother, Jean Bello. Jean Bello saw Harlean as an extension of herself, treated Harlean like she was six years old (she called Harlean “the Baby” right up until her death at age 26), managed everything about her, spent Harlean’s money, and added greatly to the stress that broke up Harlean’s marriage to McGrew. Indeed, Jean Bello is almost a caricature of a stage mother, but the story is supported by facts.

Harlean comes across as a smart, vulnerable and charming young woman who is happy in her marriage and their fairy tale life in Los Angeles. With the money to buy what she wanted and entertain endlessly, McGrew couldn’t understand why she wasn’t content. Harlean was bored with shopping trips and drunken parties; she read incessantly and knew there was more to life than just existing. I really liked the character that the author built out of historical sources. She was neither silly starlet nor vamp, and really struggled to balance husband, mother, and career.

Not only is the story of Harlean and Chuck gripping, but I loved the details about old Hollywood. Girard brought the houses, parties, and studios to life. I loved this book.

I received this book free as part of the Amazon Vine program.

Neither of these things influenced my review.
Posted by Laurie Brown at 3:44 PM