Sisi: Empress on Her Own, by Allison Pataki. The Dial Press, 2016 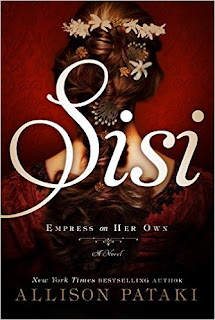 Sisi- the Empress Elizabeth of Austria-Hungary- was raised in a loose, informal manner. Her father, the Duke of Bavaria, tended to escape from his duties. So it’s not surprising that when Sisi married into the Austrian court, she would be appalled by the stiffness of the court which was run by rule and custom and allowed no free expression. Possibly the most formal court around, custom even said that no one could talk or eat before the Emperor, making meals miserable. There was a secret way of folding the napkins for the royal table! She suffered from a toxic mother-in-law who did not like her, and who micro-managed her son’s life (and then those of her grandchildren). Sisi ended up escaping from court as much as possible, taking long vacations out of the country. While she was beautiful and there was a cult of Sisi among the people, the press vilified her for not attending to her royal duties.

Her marriage was not arranged; the Emperor Franz Joseph I was supposed to marry Sisi’s older sister, but when Sisi accompanied her sister to meet her fiancé, the Emperor fell madly in love with Sisi and refused to marry the sister. Sadly, this love did not prevent him from having many affairs; finally, when Sisi found he was attracted to an actress, she invited the woman to court and found she was acceptable. The actress remained a welcome part of the family circle for years.

Sisi had little to do with the raising of her older children; her mother-in-law kept the children from Sisi and raised them herself. Sisi managed to keep her youngest daughter with her, raising her mainly outside of the capital. But she did not have an understanding relationship with even this child; she seemed completely surprised that the girl was not identical to herself and actually had a mind and will of her own.

Sisi was considered by many to be the most beautiful woman in the world. Her beauty was important to her; in a position where very little was under her control and where her own life was largely dictated by custom, she took near fanatical control of her own body. She exercised to extreme to keep her weight down in a form of anorexia, wore leather corsets to shrink her waist dramatically, was sewn into her clothing each day, took three hours a day with her hair, and used many beauty treatments. She was not a woman who would have aged happily had she lived longer.

The book has a very slow pace and a dark feeling throughout. There is such sadness in Sisi’s need to escape Vienna and her marriage. She had wealth and beauty but no freedom. I have conflicting feelings about her; sympathy for her situation but dislike for her not being more involved with her children after she broke her mother-in-law’s vise grip. She comes off as self-centered and, frankly, a bit boring most of the time. There is a lot of lush detail and historical fact; it was a pleasant read but not earthshaking.

The above is an affiliate link; if you click through and buy something- anything- Amazon will give me a few cents.

Neither of these things influenced my review.
Posted by Laurie Brown at 2:44 PM