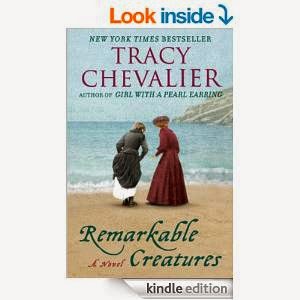 The title, “Remarkable Creatures” refers both to the two women whom this tale is about and to the fossils that they collect, which many call monsters. Elizabeth  Philpot, a spinster of middle income, moves to Lyme Regis with her two single sisters to have a place more affordable than London. The reason Lyme Regis is selected is because of the beach cliffs which regularly disgorge the fossils that Elizabeth studies and collects. Upon moving there, she makes the acquaintance of Mary Anning, child of the working class, who hunts fossils to sell to the tourists. Mary has the eye for finding them, as did her father who taught her. At this point, she knows very little about the creatures she hunts. Paleontology is a fairly new science this point in history; it’s still considered a part of geology. And Mary is poor and illiterate.

The woman and the girl find commonality in hunting the fossils. Elizabeth teaches Mary to read so that Mary can learn more from books. Most of the fossils found are ammonites and the like, but occasionally a dinosaur is unearthed- to the villagers, a monster, a crocodile. Through the years Mary finds several of these and her name becomes known in the geology world. She is not only a good hunter but has the knack of cleaning and preserving the specimens so they will last once exposed. But her abilities remove her from the marriage market of the small town. Marriage is to pass both Elizabeth and Mary by, but they form a friendship that will last many years and endure despite bad times and estrangements. This is the backbone of the story: the friendship between two women that does not constrain either of them but allows them to grow. These women are extraordinary for their time; during their lives, women were not even allowed onto the premises of the Geological Society much less allowed to be a member.

The novel avoids dates and seems to telescope time; years collapse into mere paragraphs. It sometimes moves in dreamlike fashion from one event to another. The two women’s voices alternate chapters in the first person, and I found the book compulsively readable. The women are both real, historic people, as are the men who impact their lives-Professor Buckland, Rev Conybear, James Birch, and Monsieur Cuvier, all fossil collectors. The people, the conditions endured while fossil hunting, and the era are brought vividly to life by Chevalier.

The above is an affiliate link. If you click through and buy something, Amazon will give me a few cents. This in no way affected my review.
Posted by Laurie Brown at 4:21 PM