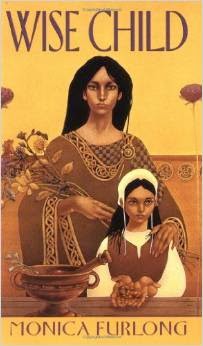 “Wise Child” is the first in a young adult trilogy set in ancient Scotland. The Wise Child of the title does not bear that nickname out of respect at first; it’s a sarcastic term for a child who thinks they know more than others. She’s spoiled and lazy. In the care of her grandmother because her father is at sea and her mother has run away to greener pastures, she finds herself out of a home when the old woman dies. When the nine year old is ‘auctioned’, she finds herself taken in by Juniper, an outsider who does healing and follows the old, pre-Christian religion. Wise Child is terrified; rumor has it that Juniper is in league with Satan, and that horrible things will happen to anyone go is taken to her house. Thankfully, like much of the wisdom children share with each other, these things are untrue. Wise Child has to do a lot of work at Juniper’s house and doesn’t like that, but it’s a far cry from being a human sacrifice. With Juniper, she starts learning things- to read and write and work with herbs- and finds it enjoyable- most of the time. Her life is peaceful, until her mother- who has powers herself and uses them for personal gain - decides she wants her daughter to come live with her, and then village priest decides it’s time to get rid of the local witch.

It’s a very good story, written for ages 10 and up, and interesting enough for adults. It captures what life was like in that era; the enormous amount of work it took to stay alive, the superstitions, the power that Christian priests had even back then when the church young, and in a setting that far away from Rome. The description of Wise Child’s education and introduction to the old religion is fascinating. I had a couple of problems with the book; there are a few anachronisms (there were no fuchsias in the old world in that time and place) and the fact that while the other characters seemed realistic (Wise Child vacillates between happy and fretful at having to work so hard, which any 8 year old would), Juniper seems too good to be true. Not one, no matter what Wise Child or the villagers do, does she ever get mad, frightened or even mildly irritated. Was her training to be a doran so thorough that she attained a complete state of Zen composure? I know that the old religion is being portrayed as being all positivity and love, but Juniper could have stood to have a little bit of negative emotion to make her more human. And, this is not a problem but an observation: while the cover is beautiful in most ways with the herbs and the Celtic designs, the big eyes and facial expressions reminded me of those paintings by Keane in the 1960s, the ones with children with the big, dead, eyes that always creeped me out. But that’s just me.

The above is an affiliate link; if you click through and buy something, Amazon will give me a few cents. This in no way affected my review.
Posted by Laurie Brown at 11:09 AM