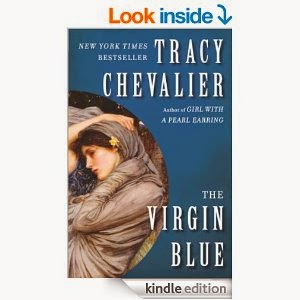 After loving ‘Girl with a Pearl Earring’ and ‘Remarkable Creatures’, Chevalier’s ‘The Virgin Blue’ was a great disappointment. The premise itself was good: twin story lines, one in today and one in the late 1500s, each told from a young woman’s point of view. One, Ella, is recently moved to France, arriving with her husband who has moved for a job; the other, Isabelle, is a French farm girl married into the local ‘rich’ family; both are midwives. Isabelle is an ancestress of Ella’s. Ella fills her time with looking into her genealogy, finding a few leads but also finding a handsome French librarian. What unfolds is a tale of superstition, magic and betrayal.

The plot had promise-it’s partly a mystery story, but the characters lacked depth. Isabelle is the only character I felt was fleshed out and even she was pretty thinly done. I couldn’t manage to like Ella, the main protagonist. She is shallow and amoral. The book reads almost like a first draft, a sketch in words when it really needed to be painted in color. An odd event- Ella’s hair turns red overnight- is never explained; I know it’s supposed to show us that Ella is tied to Isabelle but it’s like the story steps from realism to magical realism when it’s half over, with no other magical events other than some dreams. This was Chevalier’s first novel and it shows, sadly.

The above is an affiliate link. If you click through and buy something, Amazon will give me a few cents. This in no way affected my review.
Posted by Laurie Brown at 12:18 PM