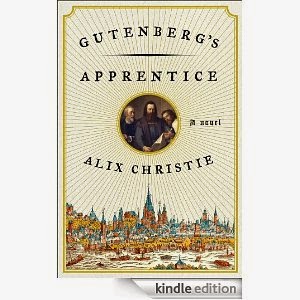 Author Alix Christie is both writer and letterpress printer, so she seems perfect for the task of writing about the invention of the moveable type press. All most of us know about that subject is that Johann Gutenberg invented it; what most of us don’t know is that the press didn’t spring fully formed from Gutenberg’s mind but was the work of several people.

The apprentice of the title is Peter Schoeffer, the adopted son of Johann Fust, who was Gutenberg’s money supplying partner. At the start of the novel, Fust has recalled Schoeffer from Paris, where he has been working as a professional scribe and enjoying the fleshly delights of the city. Fust tells Schoeffer that he is work for Gutenberg, which does not go over well with either Schoeffer or Gutenberg. Schoeffer feels the press is barbaric compared to hand writing, while Gutenberg thinks Schoeffer will be useless. Soon they realize that they are both wrong; Schoeffer begins to see the beauty and utility of type while also proving himself useful as a font designer and a carver of the metal masters from which the type is cast. He also turns out to be a natural foreman, organizing the men who melt the alloys, work the press, handle the paper and vellum sheets so they don’t smudge, and set the type. But it’s not a peaceful job; Fust and Gutenberg clash frequently over money. Gutenberg is a flamboyant narcissist who trusts no one and makes covert deals behind Fust’s back; he’s a total drama queen. The book covers the two years that it takes to get the first run of Bibles printed.

The book was interesting; I won’t say it was can’t-put-it-down but it held my interest. But it lacked a certain depth; it’s about the event and the technology and less about the people. While the characters aren’t flat, they don’t really make you feel for them, either. We get the story from Schoeffer’s point of view, but even he I didn’t care deeply about. In a book of 400 pages one should feel they know the protagonist down to their toes; this just doesn’t happen here. The love interest takes few pages and seems like an after thought, something thrown in to add tension to the story. I liked the book but didn’t love it.

Neither of these things affected my review.
Posted by Laurie Brown at 8:49 PM