The Curious Case of the Clockwork Man, by Mark Hodder. Pyr, 2011 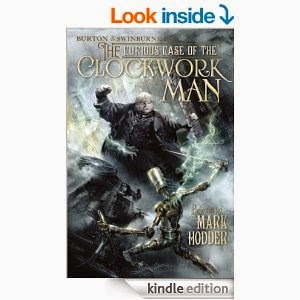 This is the second book in the alternate history/fantasy/steampunk series featuring Sir Richard Francis Burton and his sidekick, poet Algernon Swinburne. In the first book, a time traveler altered time. Queen Victoria was assassinated and Prince Albert was made king. Steam mechanisms of all kinds – including flying chairs (helicopter style) are being invented and used. Genetic manipulation is being put to use, too, creating jumbo horses, parakeets that deliver messages in between bouts of fluent obscenities, huge swans that tow passengers through the air after themselves and hyperactive delivery dogs. It’s also a world where the supernatural is real.

In this volume, the long lost heir to the Tichborne estate turns up alive and ready to get his hands on the family fortune. The problem is that, while his face looks roughly like the heir and he has the proper tattoo on his arm, this person doesn’t resemble the lost heir in any other way; he is slow of speech, his face has sutures around it, and his right and left arms don’t match. He has strange lumps under his scalp and most people immediately take to him and believe whatever he says. Soon he has the working class stirred up and rioting against the upper classes. Meanwhile his brother has been carried by spirits through solid walls and through a window to his death. And some infamous black diamonds have been stolen; gems that have metaphysical properties. And then there’s the family curse of the Tichbornes…

This is one of the most action filled books I’ve ever read. There is always something going on or some new marvel being introduced. The personalities are bigger than life. In the midst of all the action and fantasy the author finds ways to make social commentary- but not with too heavy of a hand. The book can be read without reading the first one, as Hodder fills in the background well enough. If you like steampunk, you’ll probably like this book.

The above is an affiliate link. If you click through and buy something, Amazon will give me a few cents. This in no way affected my review.
Posted by Laurie Brown at 3:23 PM