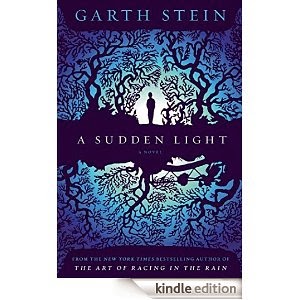 When Jones Riddell goes bankrupt and loses his house, he and his wife have a trial separation. Rachel returns to her home in England, while Jones takes his son, Trevor, back to the Riddell family home: North Estate and the Riddell House on Puget Sound, just outside Seattle proper. At the turn of the 20th century, Riddell House was an amazing mansion, built with the proceeds from exploiting the old growth timber that covered the Pacific Northwest. Now it’s termite eaten and unkept up; there is no money for repairs and barely enough to live on; and only Jones’s sister Serena and their father Samuel live in it. The crux of the story is that Serena and Jones want to sell the house and property to developers, so they can have the money they ‘deserve’, but Samuel, who has Alzheimer’s, refuses to do so. Years ago, an ancestor tried to make it so the property would eventually be returned to nature as a park, and this has created a conflict in the family for years.

The story is told by Trevor, looking back from adulthood to events that happened when he was barely 14, as he seeks to find the truth about what is going on in the house at that point- and digging into the past that formed it. He finds that there are a lot of secrets in the Riddell family and no one seems to want them dug up. There is a gay great-great (I think that’s right- I had a lot of trouble keeping the family linage straight) uncle and his soulmate; there is the medicine that Serena gives her father; there are hidden passages and stairwells everywhere; there is the maneuvering to get Samuel to sign a power of attorney; and there are ghosts. Lots of ghosts. Oh, and the family is seriously dysfunctional. Samuel comes closest to normal, and he’s got dementia. Jones abandons all parental care as soon as they enter Riddell House to wallow in his own problems- not that, it turns out, he hadn’t already been doing that for years. Serena is the creepiest aunt/sister/daughter ever.

I couldn’t put this book down. I couldn’t wait to find out what Trevor would discover next. But the book is not without its flaws. Trevor is altogether too calm when confronted with ghosts. What 14 year old meets a ghost for the first time and doesn’t have *some* kind of emotional reaction? Even if they aren’t scared, there would have to be at least some excitement. Likewise, all his other emotions seem damped down. This could be the result of the story being told from an adult perspective, but I thought it took a lot of the excitement out of the book. Still, four and a half stars for the way the book wouldn’t let me go.

This book was given to me free by the Amazon Vine program.

Neither of these things affected my review.
Posted by Laurie Brown at 4:48 PM