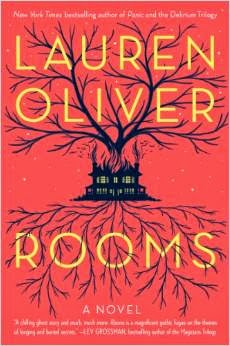 This is a story with ghosts in it, but it is not a traditional ghost story. There are no chains rattling, no dishes being thrown, no bleeding walls. Two ghosts inhabit the house of the late Richard Walker: Alice and Sandra. They spend most of their time getting on each others nerves, until Walker’s ex-wife, Caroline; their daughter Minna and son Trenton; and Minna’s four year old daughter Amy come to deal with the funeral and estate. Things change rapidly for them at this point. Everyone, living or dead, has secrets and problems that start coming out. Caroline can’t face anything- including getting out of bed- without alcohol. Minna only seems to find life bearable if she’s shagging someone- anyone at all. Trenton is still recovering, both physically and emotionally, from a nasty car accident along with being one of those kids whom everyone in school picks on. They are all absorbed in their own pains and cannot really see each other- until Trenton meets girls both living and dead.

This is a great family drama as well as a mystery; why are the two (and then three, as another joins them part way into the story) ghosts stuck in the house? What do some missing girls have to do with them? The story shows the perils of being trapped in the past and not facing up to things. The characters, other than Trenton, are very deeply flawed and, in fact, not likable at all. They are the kind of people who, if they were your neighbors, you would wish they would move away. But they are capable of learning from their mistakes, and this made me feel better about them. The book lacks somewhat in depth- there are too many characters to get deeply into most of them- but I understand that this is the author’s first venture into adult fiction and this could be the reason. I’m willing to give this book 4 stars and look for more of the author’s work.

This book was provided to me by the Amazon Vine program in return for a fair review.

Neither of these things affected my opinions.
Posted by Laurie Brown at 4:21 PM