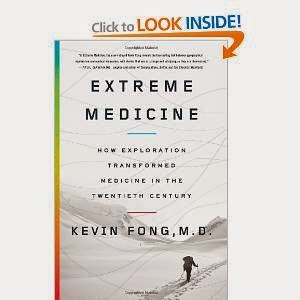 The subtitle of this book is a little misleading; while the medicine described is (or was when it was first developed) extreme, very little of it was actually brought about by exploration. The first chapter, ‘Ice’ starts with the exploration of Antarctica, which did teach us a lot about dealing with extreme cold and hypothermia, which eventually led to the use of hypothermia during radical surgeries and other treatments. ‘Fire’, which tells about the beginnings of plastic surgery and skin grafts, is based in WW 1 and how many pilots were burned beyond recognition when their planes burnt around them in battle. ‘Trauma’ shows us the first ambulance use in the Napoleonic Wars and how the trauma protocol was invented by a doctor who crashed the small plane he was flying with his family as passengers. Polio led to life support machines and ICU style care- supporting vital systems to give the body time to heal itself. Still, even though the title isn’t accurate, it’s an interesting book. The author jumps around a lot; it’s not a smooth narrative. Sometimes he gives a historical account, sometimes he writes about his own experiences (and he has had a lot of experiences; he got a degree in physics before he turned to medicine and has worked with NASA), sometimes he tells us about what happens to the body in these extreme situations. Those were the parts I found most fascinating, especially in the ‘Ice’ chapter, when he recounts how a skier went hypothermic to the point that her heart stopped, but because she was so cold, brain damage did not occur even though she went three hours without a heartbeat. An interesting book but it wanders a bit.

The above is an affiliate link. If you click through and buy something, Amazon will give me a few cents. This did not alter my review.
Posted by Laurie Brown at 8:31 PM