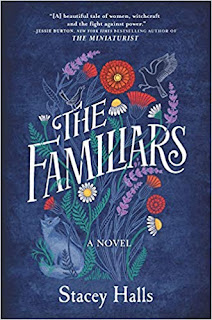 It’s 1612, in the reign of King James I, and Fleetwood Shuttleworth (a real historic person) has not had an easy life. She’s 17 and enduring her 4th pregnancy, the first three having ended in miscarriages and a still birth. She’s found a letter from a doctor to her husband saying that she will not survive another pregnancy. Her first husband, who she was married to at age 4, molested her. She’s never had a friend in her life.

By accident, she meets Alice Grey, a poor young woman who knows herbs and midwifery. Fleetwood becomes convinced that Alice is her only hope of surviving the coming birth, and ending with a live baby. But her husband’s best friend, Roger Nowell, is investigating witches (the Pendle Hill witches, to be exact), and his eye is on Alice. Convicting some witches would give Roger brownie points with the king, and enrich his retirement. In time, Fleetwood finds herself regarding Alice as a friend. She’s willing to go to any lengths to save her from being hung.

The pace is very, very slow in the first half, and then speeds up dramatically. There are several threads running through this novel, some of which don’t come to light until well into the story. Fleet herself starts out as rather a boring character- immature, naïve, and uneducated- who matures and grows through the story. At the start, she has no idea how the ‘other half’ lives, and is shocked at the conditions that exist outside her manor house. But she learns fast. I give five stars for atmosphere; the descriptions of the forests, people, villages, and homes are wonderful. While I loved Alice, the characters I was less taken with. I disliked Fleetwood’s husband a great deal, even at the end when all the threads are tied off. In the end, I give it four stars. This is Hall’s first novel; I assume her writing will mature and I will give any second book she writes a try.