All the Lives We Ever Lived: Seeking Solace in Virginia Woolf, by Katharine Smyth. Crown, 2019 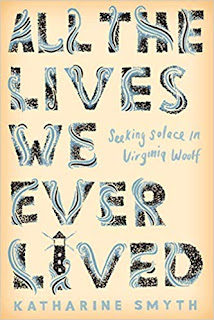 Katharine Smyth idolized her father. He was her hero and the person with who she had long talks, both growing up and as an adult. She also idealized her parent’s marriage. But her father, and the marriage, had a rather large dark side. He was an alcoholic who was a tyrant to her mother, one who raved and threw things. To make things worse, after his cancer diagnosis, he continued to drink and smoke.

Smyth went on a quest to discover who, really, her father was, back before he met her mother or was her father. She interviews people from his past. And then she pairs her own story of love and loss with that of Virginia Woolf, the author of Smyth’s favorite book “To the Lighthouse”. THL acted as a map for her own grief.

This book is a meditation on not just Smyth’s own loss, but everyone’s losses, “Loss” with a capital L. It provides a clear look at death. It would help, I think, if one has read “To the Lighthouse” (a book about Woolf’s grief over losing her mother when she was a child) prior to reading this book; I had not, and frequently felt I was missing something.

Most of the book is about the author’s father and his death- in great detail. Little is written about her mother until after the father dies. Smyth and her mother had always walked on eggshells, because her father could be a real nasty drunk. One minute he’d be warm and wonderful, the next he was in a rage. I found the author’s idolization of her father rather disturbing. Why not, instead, worship her mother, who put up with so much? But you can’t apply logic to love. It is what it is. This book is a great example of how books can help us understand ourselves, our families, and our emotions.