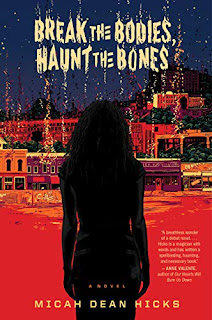 This book is…. weird. It’s a strange mashup of sci-fi, horror, fantasy, and family. The town of Swine Hill (Swain Hill), already in decay from loss of industry, has become a mostly deserted, post-apocalyptic, ruin of ghosts, pig-men, corporate greed, and angry, despairing people. The only industry still operating is the slaughter house, run by a mysterious corporate entity.

Our protagonists are teen-aged siblings Jane and Henry. Their whole family is possessed by ghosts; Jane’s tells her everyone’s secrets and Henry’s is a genius engineer who compels him to build amazing machines- and work on living flesh, too. Jane considers her ghost a sort of friend, while Henry’s takes over his body and leaves Henry missing time when the ghost departs. Lately, Henry has been working at the meat processing plant, on what, he doesn’t know. But of late, a person named Walter Hogboss has been promoted to plant manager, and he’s calling Henry.

Swine Hill is a horrible place. There are no safe spots. I wondered at times if the whole world was afflicted like Swine Hill was. It’s a story of racism, grief, whether it’s all right to eat intelligent animals, ethics, slavery, and much more. It’s a hard book to read; I found myself wondering if there was any spot of beauty in this world of dirty air and falling down buildings. There is, in some character’s souls-and not just the human ones. Five stars, even though it’s not a comfortable book to read.