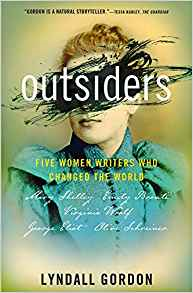 The ‘outsiders’ that the author has selected are Mary Shelley, Emily Bronte, George Eliot, Olive Shreiner, and Virginia Woolf. They were outsiders in the way they lived their lives, and in the things they wrote. All were motherless and learned the ways of being a woman through books. Three of them published under an assumed man’s name, in order to get their work taken seriously. All were feminists. All but Woolf lived in social isolation. And even though they never knew each other, there are connections between them that Gordon makes, looping back to reference something in a different chapter.

Each woman’s life and work is explored in detail, one per section. In some ways, the book reads as if it were five separate thesis or lecture; things we’ve already been told in one section get restated in another. But there is not enough of that to get tiresome.

All these women stepped beyond the common boundaries of the time that were prescribed for women. Some lived ‘in sin’. Some lobbied for women’s and human rights. Gordon describes their lives in detail, and also tells about how the world reacted to their writing, and how the writers who lived after them were affected by their work. She also shines a light on who influenced them, be they absent mother, father, husband, or sister.

I enjoyed the book (although it wasn’t a fast or easy read), but I think I would have enjoyed it more if I had known more about the women beforehand. I was lost a few times because I had not read this or that of their works. While I’ve read Shelley and Woolf, I have barely read Bronte and Eliot; Shreiner I had never even heard of. Gordon’s writing expects the reader to be widely-read. Four stars.