The Perfume Burned his Eyes, by Michael Imperioli. Akashic Books, 2018 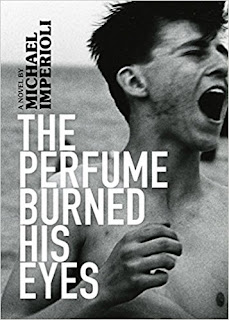 The story starts with 16 year old Matthew in 1976. His estranged, bad example of a father dies, then his grandfather follows shortly. This plunges his mother into a depression that she treats by eating tranquilizers, but it also provides an inheritance that allows them to move uptown and into a fancy apartment building in New York City. When he takes a part time job as a delivery boy for a local Chinese restaurant, he discovers that the people who he thought were a homeless couple when he’d seen them in the lobby actually live in his building, just a couple of floors up. It is, in fact, Lou Reed and his trans girlfriend Rachel. When Reed takes Matthew on as an assistant, it’s down the rabbit hole for Matt. Adding to the surrealness of his life, he falls for a girl at school: Veronica, who is an outlier, a witch, and a part time prostitute. Between Reed and Veronica, Matthews coming of age is more abrupt than most people’s, and definitely weirder. Whether it’s driving a borrowed van having never driven before, accompanying Veronica on a trick, or watching Reed basically melt down, it’s a walk on the wild side.


Matthew comes across as real and a sympathetic character. He’s been torn from his past life at a vulnerable point in his life. He’s smart. While the story takes place when he’s 16, it’s written from his POV at 18, and he looks at himself clearly and maturely. And, despite the grim subject matter, it’s funny. Four stars.

Neither of these things influenced my review.
Posted by Laurie Brown at 1:20 PM

Email ThisBlogThis!Share to TwitterShare to FacebookShare to Pinterest
Labels: 1960s, coming of age