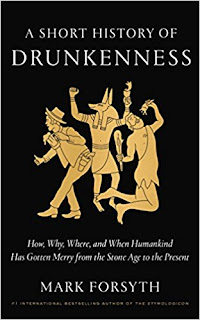 This is a brief, but fairly detailed, look at how alcohol has been used and regarded through the ages. From prehistory to America’s Prohibition, the 18 chapters tell us how alcohol has been used to see religious visions, to go to work, to end work, to discuss important issues and decisions, to communicate with their ancestors, and just about everything else. Most cultures have used alcohol, and it’s not limited to humans- naturally fermented fruit is enjoyed by both monkeys and elephants.


Forsyth’s prose is witty and irreverent, and a fast read; I read the 230 pages in two evenings- although it’s not a book that demands to be read at once; it’s one of those that you can put down and pick up again at any point. As nonfiction, it’s quite light. Sometimes the wit seems too much, as if he was afraid to write a sentence with no punchline, but all in all it’s very enjoyable. And he has done his homework and there’s a bibliography to prove it. So if you want to know who the Norse god of drunkenness was (it’s Odin) or how the gin craze started (it has to do with grain excesses), this is the book for you. Four stars.