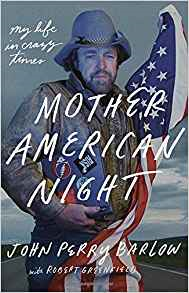 The recently deceased author had a really colorful life. He seems to have known everyone and done everything. Born to a cattle ranching family that was powerful in Wyoming politics, he went to school with Bob Weir of the Grateful Dead, and later went on to write lyrics for the band. He mentored JFK Jr., and was campaign manager for Dick Cheney. Yes, he was an acid loving, alcoholic, Republican. The cognitive dissonance is still rippling in my head. Later he became a computer hacker and cofounded the Electronic Freedom Foundation, well as writing a book that was basically an ad for Steve Jobs and Apple. He hung at Andy Warhol’s Factory and dated the Dalai Llama’s sister. I’d have thought it was all bullshit, but the people involved say his life really was like that.


All was not sweetness and adventure. As I said, he was an alcoholic. He smoked three packs a day, was a coke dealer, cheated on women, and took off with a $5000 advance for a book he never wrote. He did some of the stupidest things with his health and safety; it’s a miracle he lived as long as he did. One thing his life never was, was dull. And he tells his story in short chapters, as if he was telling them over drinks. At least in the first half of the book; somewhere near the end he sort of … slows down. Given that he was in failing health, I suspect that he just ran out of energy for telling. The prose in the latter part of the book even has a different voice to it, as if the first part was Barlow telling it in full, while the co-author had to fill in a lot in the end. A truly amusing book- I figured I wouldn’t be impressed by the man, but I was. Four and a half stars.