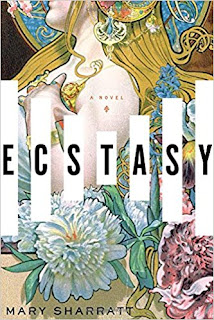 I was torn about requesting this book. On the one hand, I love Mary Sharratt. Her writing really resonates with me. On the other, it’s about Alma Schindler Mahler Gropius Werfel. A couple of years ago I read a biography of her, and it did *not* portray her in a good light. It was in agreement with what I already knew of her: she was an anti-Semite, despite having married two Jewish men and having had affairs with others. She was emotionally abusive and controlling. She was, in most every way, a horrid person. But… Mary Sharratt! I had to give it a go.


Sharratt paints Schindler in a totally different light. We meet a beautiful young woman who is serious about music and composing and longs to take advanced lessons, which her mother and step-father say is a waste of money. She is also wakening to the attractions of me; her first kiss is from Klimt – who her stepfather advises to get the heck away from the underage Alma. When she is given permission to take some more music lessons, she and her tutor fall in love, but they are forbidden to marry as the tutor is a Jew. Later, when she wishes to marry another Jew, composer and music director Mahler, it is all right- he has prestige and money. Her parents demonstrated some unpleasant prejudices to her!


Head over heels in love with Mahler, she agrees to marry him under his conditions: she must give up her own music and just support him in his career. Take care of the house, the finances, and the kids when they come along, leaving him free to give his total attention to composing and conducting. It’s a brutal compromise. Numerous times, she longs to go back to composing or at least playing the piano, but it is forbidden. She finally has a nervous breakdown.


I found this Alma Schindler appealing and sympathetic- women are still making the compromise she did these days (so do men, but not as often as women do). This is not the Alma of the biographies. I liked this Alma, and her sacrifice resonated with me. I could see how this could have made her bitter and cynical- ‘Ecstasy’ ends shortly after Mahler’s death, so we don’t see how Sharratt would have dealt with Alma’s later life.

I give the book five stars. Sharratt’s writing style is, as usual, wonderful, and she made a person I was prejudiced against likeable and well rounded.

The above is an affiliate link. If you click through and buy something- anything!- from Amazon, they will give me a few cents.