The Very Marrow of Our Bones, by Christine Higdon. ECW Press, 2018 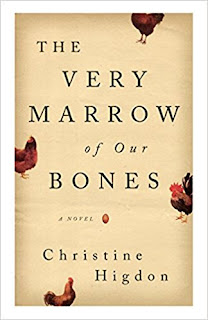 When Lulu Parsons is ten, her mother and another woman from their small town in Vancouver disappear on the same day. No one knows what has become of them; have they been abducted, or murdered, or did they run away together? But Lulu has found a note and knows that her mother is alive. The absence of Bette Parsons tips Lulu into a life of criminal activity, sexual abuse, drugs, drinking, and sleeping with pretty much anyone who asks- and no one in the family is aware of this. She’s the youngest child in the family, and the other kids have no time for raising her. Her ineffectual father is at a loss as to how to deal with his family. Lulu’s voice, in first person, tells half of the story.


The other half, alternating with Lulu, is told in third person from Doris Tenpenny’s point of view. Doris is the mute daughter of the fire and brimstone preacher who expects unreasonable things of his family. She sells eggs and vegetables at their farm stand and customers tell her their secrets, as if they think being unable to speak means being unable to communicate. In reality, she is the most perceptive person in town. She and Lulu find themselves thrown together oddly, when the man who has abused them both leaves his property to the two of them when he dies in a strange accident.


The story is not just about Lulu and Doris, though; it has a huge cast of characters. More than once I got confused as to who people were. The story is not told in linear time but jumps around, which added to my confusion. Covering more than forty years, the story sees the people go through a lot of changes. Families rearrange themselves. I found the book irresistible- I could not stay away from it. The writing is lovely and some of the characters are just wonderful- I would love to be Doris’s neighbor! I give this book four and half stars; it’s a great story but there are a couple of places where it does drag a bit (Bette Parsons, I’m looking at you).

The link above is an affiliate link If you click through and buy something- anything- from Amazon, they will give me a few cents.

Neither of these things influenced my review.
Posted by Laurie Brown at 11:47 AM