My Patients and Other Animals: A Veterinarian’s Stories of Love, Loss, and Hope, by Suzanne Fincham-Gray. Spiegel & Grau, 2018 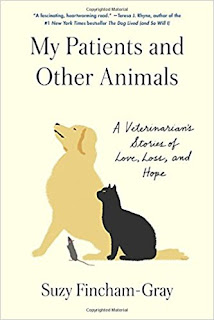 This is the memoir of a vet, but it’s not the jolly, feel-good type like James Herriot. It starts with her having to fire a gun at a pony’s forehead by way of euthanasia, as part of her veterinary training. Then she comes to the US to train more at a prestigious teaching clinic, meaning to go into research after attaining her license. But the exposure to the animals while training made her change her mind (she had never had a pet); she decided she wanted to work directly with dogs and cats instead. This, despite the intense hours, the pet owners who were sometimes not terribly agreeable, the sadness of losing a patient, and the basic lack of a life outside the clinic.


Once working for a regular clinic, she finds that it’s not like the university; in the ‘real’ world, there are a lot more financial constraints to deal with. She couldn’t just order up every test available, but had to work within the owner’s budget. She also finds that the staff isn’t ready to do everything she tells them to do the way the university interns did, and she manages to upset more than one technician- they never taught human relations in vet school.


But during these years, she gets her first pet- a senior cat- who is soon joined by a second one. She also meets the man who becomes her husband, who is a dog person. She learns the incredible bond that can form between people and their companion animals. While I felt that when she first started, she was lacking something, she describes as she becomes the complete animal person. I enjoyed the book a lot, even though it’s not a ‘warm fuzzy’ animal book. She’s an internal medicine specialist, so her cases are more complicated than the usual run of spay/neuter, worms, etc vet visits. Four stars.

Neither of these things influenced my review
Posted by Laurie Brown at 3:00 PM