The Council of Twelve, by Oliver Potzsch. Mariner Books, 2018 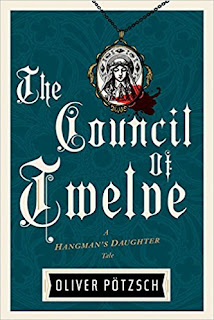 In 1672, the executioners of Bavaria are having a meeting of the Council of Twelve, a prestigious group- well, as prestigious as a hangman can be in a time and place where they are considered dishonorable and tainted. Jakob Kuisl takes his entire family there- his married daughter Magdalena, her physician husband Simon, her three children, and his unmarried daughter Barbara, with the thought of finding her a husband there in Munich. The fact that Barbara is already pregnant, and doesn’t even want to get married, complicates matters. Jakob’s son Georg, apprenticed to a hangman of a different city, is also there. Simon is there in hopes of finding a sponsor for his thesis about preventing infections. These strands weave around and into the mystery, which is that young women are turning up dead, all with a certain medallion and all killed in ways that executioners use on female criminals. Of course, the town’s suspicions turn to the group of hangman in their midst. They fear the despised executioners have unleashed a devil on the town.


As Jakob tries to unravel the mystery before the executioners become the executed by mob, more women are found dead- as is one of the hangmen’s own. How are these women connected? What is the common thread? Meanwhile, Magdalena has become embroiled in another mystery and has gone undercover in a silk mill, from which there may be no escape.


I loved this book. I did not realize when I asked for the book that it was the 7th in a series, but the author made the family relationships clear right away and I was able to jump right in without feeling I was missing anything. Potzsch deftly handles the multiple threads of plot (I haven’t mentioned them all; there are simple too many) and never drops the many balls he’s juggling. He paints a vivid picture of the time and place- all too vivid at times, a lot of things being rather gross and grim back then. From street girls to the royal court, everyone seems to be involved. The story is full of action and the characters all come to life. Five stars.

Neither of these things influenced my review.
Posted by Laurie Brown at 3:14 PM