The Girls in the Picture, by Melanie Benjamin. Delacourt Press, 2018 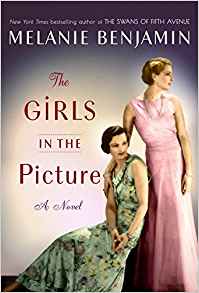 In 1914, Frances Marion, a twice divorced artist, was living in Los Angeles, drawing for an advertising company. Then she met Mary Pickford, then one silent film star among many others, and both their lives changed. Frances became a script writer and director, working mainly with Mary, and Mary became the top female star in the world. Not only did the two women’s talents mesh, they became best friends, inseparable at work and at home. Eventually, they would both win two Academy Awards. But people change. Mary met Douglas Fairbanks and they fell in love, becoming the king and queen of Hollywood. They built Pickfair, a dream mansion, and hosted not must Hollywood royalty but real live royalty. Frances married Fred Thomson, a soldier, athlete, and former minister, and while they were rich, they lived much more sedately. And Mary changed, with her fame and wealth going to her head.

The story alternates between Frances’s and Mary’s points of view; Frances in first person and Mary in third. The author has a real way with describing emotion that grabs me. Frances stays likeable all through the book, but at times, Mary is not. She has a lot of stress on her; from the time she was a small child, she was supporting her mother and two siblings. She also had a public that wanted her to continue playing children when she was well into her 30s (she was tiny) and got upset when she cut her famous curls off for a stylish bob. She thought about business constantly, running through the ledgers of United Artists every day. It’s understandable that she might succumb to stress in unpleasant ways.

I loved this book despite the sadness within. It’s about love and a lifetime of friendship, and two women who became huge forces in Hollywood when Hollywood was just beginning. In a business that quickly became male dominated, they didn’t give up their power or succumb to the casting couch. I have a love for old Hollywood tales, and this is my favorite so far. Five stars out of five.

Darla, I'm putting this one aside for you! :-D

Neither of these things influenced my review.
Posted by Laurie Brown at 2:24 PM