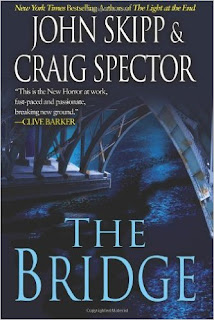 This science fiction/horror tale is totally agenda driven. It’s about the day that toxic waste, thrown into the creeks, rivers, and earth, become sentient and rise up against humans. It’s about as subtle as a sledge hammer with its message that we are destroying the earth.

Written in 1991, the novel is sited in the town of Paradise, Pennsylvania, a small to medium sized city. It’s large enough to have some industry, and that industry creates waste. So there is a company that deals with relieving businesses of their waste. Problem is, they are not very particular about disposing of said waste. Their subcontractors- redneck yahoos who consider ‘out of sight, out of mind’ a good working plan- aren’t any more particular. One day as they dump 55 gallon drums into the creek, the creek itself- joined with the waste already there- rises up. Then there is the nuclear power plant in the county that is starting to sing to itself as all hell breaks loose…

It’s a very grim novel, with lots of vivid gore; the descriptions of what happens to the humans is revolting. I didn’t realize until after I read the book that they authors are considered splatter punk kings. There are a lot of characters in the book; sometimes it’s hard to keep track of them. Sadly, none are fleshed out at all. They are just puppets doing their jobs for the story. The plot is also lacking. The book is powerful, but still a letdown because of that.

The above is an affiliate link. If you click through and buy something- anything- Amazon will give me a few cents. This in no way affects my review.
Posted by Laurie Brown at 4:17 PM