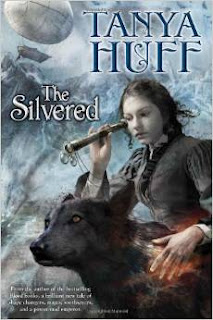 In ‘The Silvered’, the world is similar to ours during the Victorian era. Except there are werewolves, mages who can control different elements, and magical artifacts from the past. There are also guns and airships. It’s vaguely steampunk in feel, even though there is no actual steam technology.

Mirian Maylin, 19 years old, has some mage blood. She has tested as having powers in several elements, but has not progressed beyond first level in any of them. She has been invited to *not* come back to the university next semester because she performs so poorly. Her mother’s biggest worry is that Marian might not attract the attention of someone of the Pack, and marry into it. Marian does not care if she ever gets married.

We start the book with a war beginning; the Empire is attacking the country of Aydori and has declared Pack members to be abominations. A rather garbled warning from a Soothsayer has Emperor Leopald kidnap the top five members of the Mage pack. Mirian finds herself in the position to follow the Mage pack to the Empire’s capital city and try and rescue them. She also finds herself in the company of Tomas Hagen, younger brother to the Pack leader, and, with Captain Reiter of the Empire forces following her because they think she’s the missing sixth member of the Mage pack.

I really liked the characters; Mirian is strong, smart, and stubborn (and, according to Hunt Pack members, smells amazing- a sign of mage powers) and she and Tomas have to grow up a lot in just a few days. While they find themselves partners by chance, they work very well together. Likewise the kidnapped Mage pack leader, Danika, has to face great personal loss along with physical and psychological abuse but stands up to it. I should warn you there is a lot of brutality in this book; it’s set during a war and it doesn’t bring out the best in a lot of the soldiers. It also shows the peril of dehumanizing others; it makes it far too easy for people to discount the worth of their lives.

The book ties up all the loose ends- even though as I got near the end of the book I couldn’t figure out how the author would manage that in such a short number of pages. But I’d forgotten how good a writer and world builder Tanya Huff is; parts of the ending are very unexpected, it’s neatly done, and, while this is a standalone novel, there are a few things that could lead into another volume set in this world if she wanted. I’m hoping she’ll do so!

The above is an affiliate link. If you click through and buy something- anything- Amazon will give me a few cents. This in no way influenced my review.
Posted by Laurie Brown at 1:53 PM